Greeks mythology is the stories, rituals, heroes, Gods and Goddesses from the ancient Greek history.  The fact that it is called mythology is because there is no proof of these legends actually existing in the past. These are just stories from the folklore which were told by the ancient Greeks and are still going around. The stories of them bickering among themselves, their battles, their sexual conquests have influenced the western media and as a result their language and narrative. Let’s discuss some of the A-listers from the Greek Mythology.

Zeus was the son of Cronus who was the King of Titans. He overthrew his father and became the King of Gods; the chief deity. Zeus was the God of weather. He had many relationships. However he was really interested in marrying and ruling the throne together with his sister Hera, the goddess of marriage and childbirth. He had another woman as his weakness known as the Helen of Troy who was an immortal.

Poseidon is the Greek God of seas, horses and earthquakes. He was one of the most greedy, bad-tempered and moody Olympian God. Poseidon was very vengeful whenever he was insulted. He and his other siblings were swallowed by his father Cronus. Well that’s pretty normal right?

Like other Gods in the Greek mythology Hermes was also responsible for a couple of things. He was a standing pastoral figure, which was responsible for the livestock security. He was also the God of deception, fertility, music and luck.

Hera was the queen goddess of the Olympian gods. She was both the sister and wife to the king of gods Zeus. She was very reserved and austere yet she was very merciless about her husband’s extramarital romantic affairs. Hera tended to go to the other women and torture them instead of questioning Zeus of the matters. A strong independent woman indeed!

Hades was the God of death. He is one the few Gods from the mythology who are portrayed as dispassionate. He was not the ultimate judge of the souls which used to wander in his domain. However, he was very cunning because he tricked the goddess Persephone into eating some seeds of pomegranate seeds and made her stay with him.

Dionysus was the son of Zeus who was born to a mortal woman. He accidentally killed the woman and took Dionysus with him. When he grew up his cult revolved around sex, savage rituals of sacrifices and intoxication. This is why he was the God of wine.

Demeter was the mother of Persephone and was a goddess of agriculture. Hades abducted her daughter to be his wife. She went to look for her daughter and accepted the hospitality of the royal family of Eleusis. Later, she taught the religious rites known as the Eleusinian Mysteries.

Apollo was most feared amongst the Gods. He was also the son of Zeus. Apollo was the God of music, sun, archery, poetry, medicine and healing. He was the leader of the muses. There was an oracle of Apollo where a priest received messages from Apollo himself. Then he delivered it to the people who sought advice and direction.

Ares was the God of bloodlust. He was very savage and bloodthirsty even in his combat. The other gods weren’t really fond of him because he asked for some prisoners of the war to be donated for his worship. He was also fond of dead puppies being sacrificed for him. What a jerk!

Artemis was the goddess of hunting. She is portrayed by a deer and a hunting dog. Artemis was a great huntress and also the protector of the living world. She was the patron of the young women and girls. She also protected the women during childbirth. 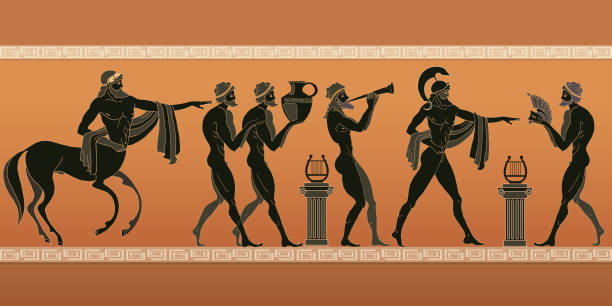 Athena was the goddess of war, wisdom and reason. She was the most feared amongst all the goddesses. Even the gods feared her because she was a fierce fighter and a ruthless warrior. She was the Zeus’s favorite child. Interestingly, no mother bore her. In fact she just sprang out of Zeus’s head as a fully grown adult. Dressed in an armor. Just like that!

Aphrodite was the goddess of love, pleasure, procreation, beauty and passion. She emerged out of her father’s severed testicles thrown in the sea by his son, the Titan Cronus. (Awkward silence…..)

Anyways! These were the 12 Olympians, the 12 Gods and Goddesses from the Greek Mythology. Have a good read everyone. Happy reading!